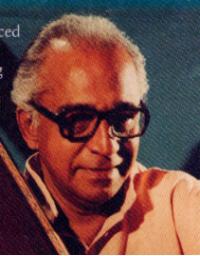 Vasantrao Deshpande was a renowned Hindustani classical vocalist who was also a great performer of Natya Sangeet.

Vasantrao Deshpande was born in Sawlapur, District Amravati, which belongs to Vidarbha region of State of Maharashtra, in India.

He learned from several gurus, refusing to tie himself down to a single school of singing. He started his musical training in his home town Nagpur under Shankarrao Sapre from Gwalior, who in turn was a disciple of Vishnu Digambar Paluskar. This was followed by Sureshbabu Mane of Kirana gharana, Asad Ali Khan of Patiala gharana, Aman Ali Khan and Anjani Bai Malpekar of Bhendibazaar gharana, and Ramkrishnabuwa Vaze. But the most important influence on him was Dinanath Mangeshkar, and Vasantrao was the sole true inheritor of Dinanath's mercurial style of singing.

At the age of eight, Bhalji Pendharkar perceived his musical talent and launched him in the role of 'Krishna' in Hindi movie Kaliyamardan. He had received the training under different gharanas (schools or styles of music): Patiala, Bhendi Bazar, Kairana; yet he did not receive the stamp of any particular gharana.

Deshpande performed classical and semi-classical music. In the raga form which constitutes classical music, the artist displays his creativity on a basic canvas. Deshpande's rendition of ragas such as Marwa, Salag Waraali, Nat Bhairav, Kauns (in its various forms), Chhayanat, Basant Mukhari, Patamanjari, Jaijaiwanti, Janasammohini, Bhoop, Shree, Kalavati, Maru Bihag, and Yaman had a quality to them that kept people interested. His performance of offbeat ragas was not too different. The sargam was his forte. He conceived Raga Raj Kalyan, a Yaman variant with 'Pancham' dropped altogether. He was also an accomplished tabla and harmonium player.

He was equally at ease with the thumri, dadra and ghazal forms, the latter of which has its origins in countries like Iran and Afghanistan. He had picked up the original style and nuances of the thumri and ghazal while studying at Lahore. He also learnt quite a bit of Urdu to elevate his ghazal performances. Another area of music where he made his mark was "Marathi Natyasangeet". Some of the plays in which he acted and performed were "Katyaar Kaaljaat Ghusli", "He Bandha Reshmache", "Vij Mhanali Dhartila", "Meghmalhar", "Tukaram" and "Varyawarchi Varaat". Out of these, "Katyaar Kaaljaat Ghusli" became highly popular. Vasantrao became the cynosure of everyone's eye for his challenging role of "Khan Aftaab Hussain Khansaheb". As the play's popularity began to soar, he acquired the alias, "Pandit Vasantkhan Deshpande".

He acted in movies like "Kaaliya Mardan"(he was just eight), "Dudh Bhaat", "Ashtavinayak" and many more. He gave playback to more than 80 Marathi films. Besides pure music, he also put together the history of Marathi music plays, from origin showing their evolution up to the present stage. This is how he presented his brainchild, his tour de force, "Marathi Natyasageetachi Vaatchaal" (the evolution of music in Marathi music plays). In this he would first explain the socio-cultural influences that shaped the musicals as they stood in a particular era and then demonstrate the evolution through its music. The concert was first held in Delhi. It stretched for three days, six hours each day. The experiment was bound to be a winner with the audience.

He was a thinker and he blended these styles to develop a style of his own. He did not believe in imitation. Considering the timbre of his voice, pitch, range and expressive capacity, he forged his own characteristic style. He usually began his exposition of a raag in the Jod-Aalap or ‘Nom-Tom’ style and created a kind of foundation for his musical statements. This created an aesthetic tension in the listener’s minds and then he landed beautifully on the first beat of the khayal- the ‘sam’. His development of the khayal was always full of such tensions and releases, which pleased the audience. He had an equal command of both common and uncommon ragas and a large repertoire of compositions. He presented them judiciously, considering the type of audience before him.

Dr. Vasantrao Deshpande was an academic, earning himself a PhD in "The Transformation of Hindustani Classical Music". He was also invited to several educational institutions to deliver lectures on music, quite often with live demonstrations.

Vasantrao had several commercial releases under his name. Among them, the more famous are his LP of Marwa and a two-cassette interview, conducted by Va Pu Kale, about the history of Marathi Natya Sangeet which showcases the breadth and depth of Vasantrao's knowledge about the art form.

His grandson Rahul Deshpande is a classical singer and he is carrying his style further. He has trained under Gangadharbua Pimpalkhare, Usha Chipalkatti and Mukul Shivputra, son of Kumar Gandharva. In 2009, he played the lead of Khan Saheb in musical, Katyar Kaljat Ghusli, which was played by his grandfather in the 1960s.

The "Dr Vasantrao Deshpande Pratishthan" based in Pune, where his grandson Rahul Deshpande is a trustee and actor Nana Patekar a patron, organizes an annual music festival in his memory, titled Vasantotsav in Pune. The three-day festival is held in the month of January each year. Noted classical musicians and performers take part the festival. During the festival, two awards, the "Vasantotsav Youth Award" for Promising artists and " Vasantotsav Award" for veteran artists are given.

In 2011, a three-day music and dance festival in his memory, was organized by the South Central Zone Cultural Centre (SCZCC) of Government of India in Nagpur.