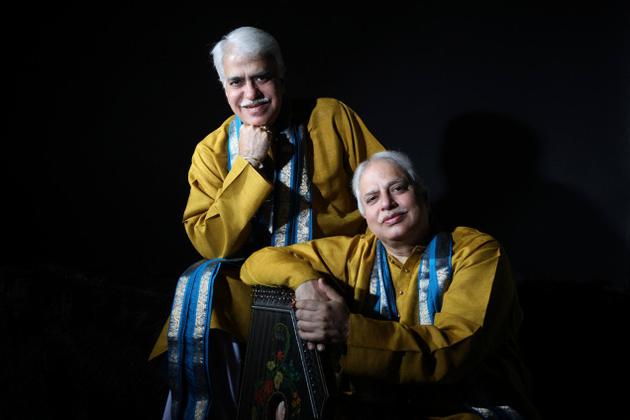 Rajan and Sajan Mishra are brothers, renowned singers of the khyal style of Indian classical music. They were awarded the Padma Bhushan in 2007, Sangeet Natak Akademi Award, jointly in 1998, the Gandharwa National Award for 1994-1995 and the prestigious National Tansen Samman 2011-2012 on 14 December 2012.

Rajan (born 1951) and Sajan (born 1956) Mishra were born and brought up in Varanasi. They received their initial musical training from their grandfather's brother, Bade Ram Das Ji Mishra, and also their father, Hanuman Prasad Mishra, and from their uncle, sarangi virtuoso, Gopal Prasad Mishra, and started performing while they were still in their teens. They moved to Ramesh Nagar in Delhi, in 1977, where they continue to live.

Rajan and Sajan Mishra are part of a 300-year-old lineage of khyal singing of the Banaras gharana, the Mishra brothers have been performing to audiences all over Indian and the world for many years.

They were both accountants in a small shop when they gave a performance in the presences of Satguru Jagjit Singh. The Satguru, realizing their talent, offered to pay double their living wages in exchange for them to put in more time to practice their vocals. The rest was history and they gave their first concert abroad, was in Sri lanka in 1978, and soon they went on to perform in many countries across the world including, Germany, France, Switzerland, Austria, USA, UK, The Netherlands, USSR, Singapore, Qatar, Bangladesh and Muscat.

“When we sing, we are one soul singing, even though we are in two bodies”
Says Pts. Rajan-Sajan mishra,

Pts. Rajan-Sajan mishra’s taleem began as if with first breath of life. No wonder, therefore, their music is marked by an unequally reposeful exposition of the raga balanced with aesthetic tension generated through delicate handling of rhythm. The intricate creative process make their rendering both academically rich and melodically abounding. While executing intricate Tanns and Sargams, their wide ranging mellifluous voice, combine with masterly command over the technique, enables them to translate their highest flight of imagination into sublime music.
They are today the foremost exponent of the Banaras Gharana of singing.

Saraswati, The Hindu Goddess of music and learning, has amply showered her blessings on the two brothers: Rajan ji is a post graduate in sociology, and Sajan ji a graduate from the Banaras Hindu University.

Music that religiously observes the purity of raga, gifted with rare sensitivity, Pts. Rajan-Sajan mishra’s compositions reflect a high regard of literary content, which brings out their subtlest intended emotions and carry an instant appeal with the audience.

Pts. Rajan-Sajan mishra have delighted audiences all over the world, and their creativity and contribution to the art has won them wide recognition from various quarters, including the much prized honour, the Padma Bhushan Award, Sangeet Natak Academy Award given by the President of India. They have been conferred in the past, Kashi Gaurav Award, Sangeet Bhushan Award and Sanskriti Award given by the Prime Minister of India.

They have extensively toured all over the world. Many times to U.S.A. , whole of Europe, Singapore, Sri-Lanka and countries in Middle-East, Doha, Qatar, Dubai etc. They have given whole night concert in Royal Albert Hall (London) Lincoln centre in U.S.A. They have also received most respectful honour as citizenship of Baltimore city of U.S.A.

Their recordings are available with every company in India. As Music Today, H.M.V. , Virgin Records, Megnasound, Sony, B.N.G. Crecendo, Venus, T-Series, A.M.C. and many more.

‘Viraam’ The Gurukul situated in a peaceful and serene outskirts of Dehradun, Uttarakhand, is created by them to explore the meditative qualities of Indian Classical Music and teach their disciple through the age old tradition of Guru Shishya Parampara.

And yet their soul yearns to go beyond, into the unknown.