Where to get a 'classic' ringtone?
by Papon 4 weeks ago
More... 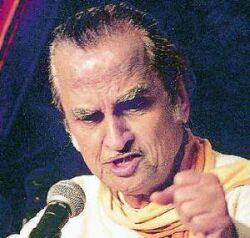 Pandit Dinkar Kaikini, the veteran Hindustani classical singer, died of a cardiac arrest at his residence in Mumbai, on the morning of January 23, 2010. Amongst the most learned exponents of khayal, Dinkar Kaikini represented the assimilated musical learning of the Gwalior and Agra gharanas, having trained under stalwarts like Omkarnath Thakur, S N Ratanjankar and S C R Bhatt. He performed widely over a career spanning several decades and served on various committees and examination boards.

Born on October 2, 1927, Dinkar Kaikini was all of seven years when he attended a concert that was to change his life forever. In one evening, he had the rare opportunity of hearing three greats of a Golden Age in Hindustani Sangeet: Ustad Alladiya Khan, Ustad Faiyaz Khan and Ustad Abdul Karim Khan. Upon hearing Ustad Faiyaz Khan, the young boy knew that he must devote his life to this art form and to the particular style of Faiyaz Khan Saheb himself. And thus began a lifelong journey dedicated to the mastery, propagation and furthering of Hindustani Raagsangeet.

His first guru was Pandit Karekatte Nagesh Rao, a veteran exponent of the Patiala Gharana. He then trained under Pandit Omkarnath Thakur of the Gwalior Gharana for a couple of years. He was about eleven years old when he joined Marris College, Lucknow, where he received the heart of his taalim from his Guruji, Pandit S.N. Ratanjankar, disciple of Pandit Vishnu Narayan Bhatkhande and Ustad Faiyaz Khan. Along with other shishyas, like S.C.R. Bhatt, Chidanand Nagarkar and K G Ginde, Kaikini spent his formative years receiving the rigorous training that helped him develop a keen sense of aesthetics as well as a passion for teaching and imparting knowledge. As a grand finale to this, he received the prestigious Bhatkhande Gold Medal for Khayal singing in 1943, following his performance in the final Bachelor of Music examination.

Dinkar Kaikini`s career as a musician was a testament to his limitless creativity: it exhibited a profound versatility and commitment to the art. He has devoted his life to performing, composing and teaching. His performing career started in 1946 and flourished thereafter. He toured widely internationally and served as an ambassador for Hindustani music, not only as a performing musician, but also as an educator. He also held prominent positions in the music field. He spent long years with All India Radio, starting in 1954, first as composer and then Producer. He was also Assistant Director for the Directorate, Ministry of Information and Broadcasting. This was followed by a long tenure as Principal at Bharatiya Vidya Bhavan`s Music and Dance School, Mumbai. As Principal, Kaikini furthered his longstanding belief in promoting music through education and awareness.

Throughout his life, Kaikini had been a prolific composer, having composed hundreds of compositions in styles like khayal, dhrupad, dhamar, thumri and bhajan, as well as several new ragas. He also composed for large choruses and set music for films and the ballet production, `Discovery of India` with Pandit Ravi Shankar.

In recognition of his tremendous contribution to music, the honours that came his way have been numerous. These include the Sangeet Natak Akademi Award, the Tansen Award, Sangeet Ratna (Swar Sadhana Samitee, Mumbai), Sharangdev Award (Sur Singar Samsad) and the ITC Award, to name just a few.

Kaikini's entire family is deep into music. His wife Shashikala, radio vocalist and recently retired as the Principal of Bhavan’s College of Music and Dance. His younger son, Yogesh Samsi is a reputed tabla player and his daughter Aditi is a classical singer based in Bangalore. Pandit Dinkar Kaikini’s legacy lives on.

At the condolence meeting to be held in his memory on the evening of January 27th, stalwarts of Hindustani classical music like Pandit Arvind Parikh, Dr Ashok Ranade, Pandit Shiv Kumar Sharma and Ustad Zakir Hussain will reminisce about their association with the maestro.