Museum Walk
by gaurigupta 4 months ago

raga Chayanat
by Papon 10 months ago 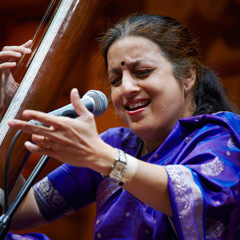 Dr. Ashwini Bhide-Deshpande (born on October 7, 1960) is a Hindustani classical music vocalist of the Jaipur-Atrauli Gharana.

Dr. Bhide-Deshpande holds a Masters degree in Microbiology and earned a doctorate in Biochemistry from the University of Bombay.

It was not until she completed her doctorate, when Dr. Bhide-Deshpande even considered a professional career in music. Despite, Dr. Bhide-Deshpande was well received by musical connoisseurs since her late teens. Since the late 1980s, Dr. Bhide-Deshpande has been on concert tours to every continent and frequently performs at prestigious music conferences around the world, including the Sawai Gandharva Sangeet Mahotsav in Pune, Maharashtra.

Dr. Bhide-Deshpande has an intimate understanding of Bandish and bandish-composition and has created many of her own bandishes, which she has published in her book, Raag Rachananjali (2004). A sequel titled "Ragarachananjali 2", containing 98 more bandishes (compositions) was published in 2010.

Ashwini Bhide is not only a music scholar but is also blessed with a beautiful voice. I have personally known Ashwini since her early teens and it makes me so happy to see her blossom into such a wonderful Khayal singer. She has earned the reputation of being one of the top young artists of India... Having learnt many old compositions, she has been able to retain the spirit of the tradition through the dialects she has used as well as pay attention to the subject matter!