raga Chayanat
by Papon 4 weeks ago 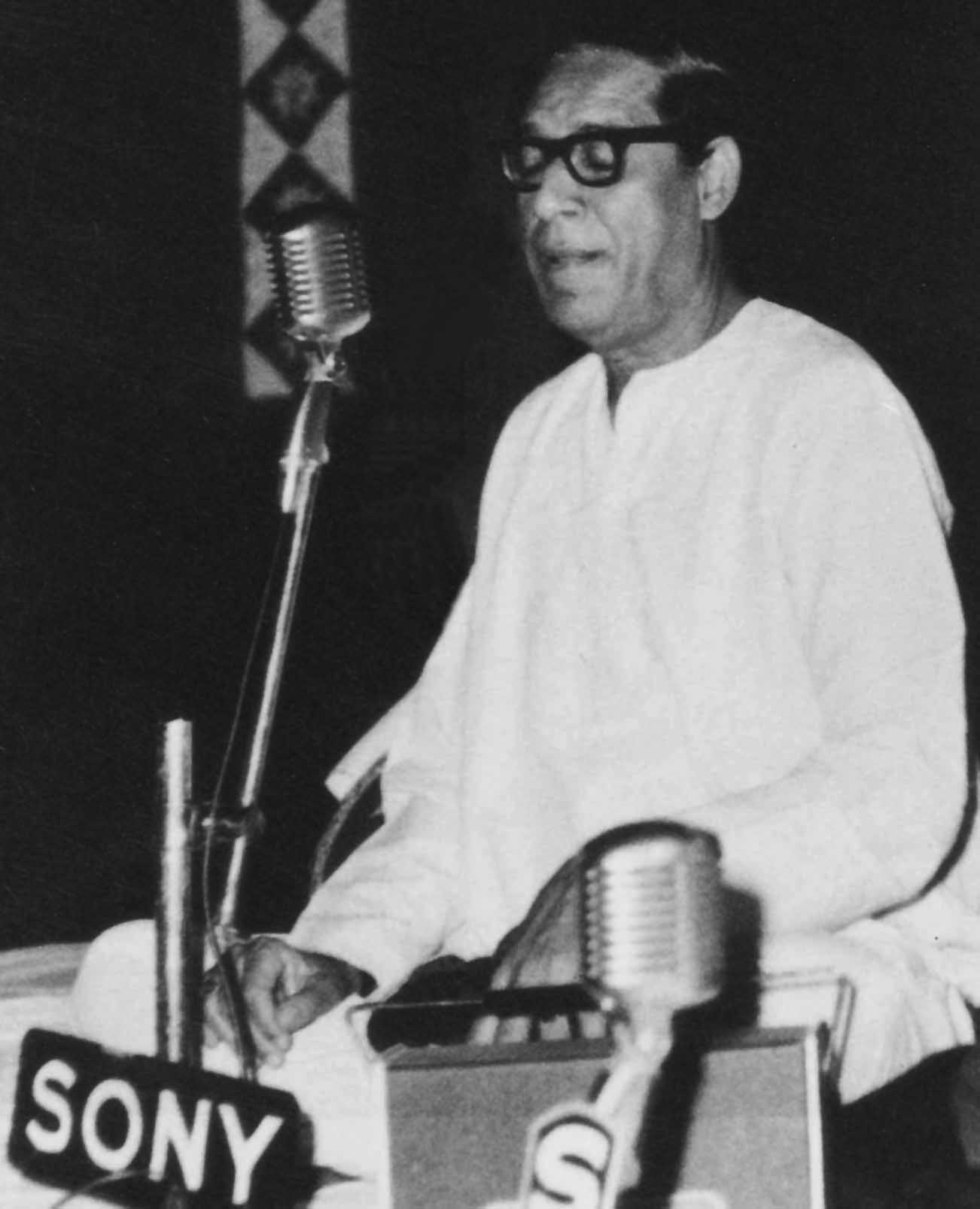 Ustad Amir Khan (August 15, 1912 – February 13, 1974) was a well-known Indian classical vocalist. He is considered one of the most influential figures in Hindustani classical music, and the founder of the Indore Gharana.


Amir Khan was born in a family of musicians in Indore, India.[2] His father, Shahmir Khan, a sarangi and veena player of the Bhendibazaar gharana, served at the court of the Holkars of Indore. His grandfather, Change Khan, was a singer in the court of Bahadurshah Zafar. Amir Ali's mother died when he was nine years old. He had a younger brother, Bashir, who went on to become a sarangi player at the Indore station of All India Radio.

He was initially trained in the sarangi by his father. However, seeing his interest in vocal music, his father gradually devoted more time to vocal training, focusing on the merukhand technique. Amir Ali was exposed at an early age to many different styles, since just about every musician who visited Indore would come to their house, and there would be mehfils at their place on a regular basis. He also learned the basics of tabla playing from one of his maternal uncles, who was a tabla player.

Amir Khan moved to Bombay in 1934, and there he gave a few concerts and cut about half a dozen 78-rpm records. These initial performances were not well received. Following his father's advice, in 1936 he joined the services of Maharaj Chakradhar Singh of Raigadh Sansthan in Madhya Pradesh. He performed at a music conference in Mirzapur on behalf of the Raja, with many illustrious musicians present, but he was hooted off the stage after only 15 minutes or so. The organizer suggested singing a thumri, but he refused, saying that his mind was never really inclined towards thumri. He stayed at Raigadh for only about a year. Amir Khan's father died in 1937. Later, Khansahib lived for some time in Delhi and Calcutta, but after the partition of India he moved back to Bombay.

Amir Khan had a rich baritone voice with a three-octave range, and could move equally effortlessly in any octave. He developed his own gayaki (singing style), influenced by the styles of Abdul Waheed Khan (vilambit tempo), Rajab Ali Khan (taans) and Aman Ali Khan (merukhand). This unique style, known as the Indore Gharana, blends the spiritual flavor and grandeur of dhrupad with the ornate vividness of khyal. Amir Khansahib presented an aesthetically detailed badhat (progression) in ati-vilambit laya (very slow tempo) using bol-alap with merukhandi patterns, followed by gradually speeding up sargams with various ornamentations, taans and bol-taans with complex and unpredictable movements and jumps while preserving the raga structure, and finally a madhyalaya or drut laya (medium or fast tempo) chhota khyal or a ruba'idar tarana. He helped popularize the tarana, as well as khyalnuma compositions in the Dari variant of Persian. While he was famous for his use of merukhand, he did not do a purely merukhandi alap but rather inserted merukhandi passages throughout his performance.

Khansahib often used the taals Jhoomra and Ektaal, and generally preferred a simple theka (basic tabla strokes that define the taal) from the tabla accompanist. Even though he had been trained in the sarangi, he generally performed khyals and taranas with only a six-stringed tanpura and tabla for accompaniment. Sometimes he had a subdued harmonium accompaniment, but he almost never used the sarangi.

While he could do traditional layakari (rhythmic play), including bol-baant, which he has demonstrated in a few recordings, he generally favored a swara-oriented and alap-dominated style, and his layakari was generally more subtle. His performances had an understated elegance, reverence, restrained passion and an utter lack of showmanship that both moved and awed listeners. According to Kumarprasad Mukhopadhyay's book "The Lost World of Hindustani Music", Bade Ghulam Ali Khan's music was extroverted, exuberant and a crowd-puller, whereas Amir Khan's was an introverted, dignified darbar style. Amir Khansahib believed that poetry was important in khyal compositions, and with his pen name, Sur Rang ("colored in swara"), he has left several compositions.

He believed in competition between the genres of classical music and film and other popular music, and he felt that classical renderings needed to be made more beautiful while remaining faithful to the spirit and grammar of the raga. He used to say, "नग़मा वही नग़मा है जो रूह सुने और रूह सुनाए" (music is that which originates from the heart and touches the soul).


Characteristics of his style include:

Besides singing in concerts, Amir Khan also sang film songs in ragas, in a purely classical style, most notably for the films Baiju Bawra, Shabaab and Jhanak Jhanak Payal Baaje. This attempt to introduce classical music to the masses through films significantly boosted Khansahib's visibility and popularity. He also sang a ghazal Rahiye Ab Aisi Jagah for a documentary on Ghalib.

Amir Khan was awarded the Sangeet Natak Akademi Award in 1967 and the Padma Bhushan in 1971.

Amir Khan's first marriage was to Zeenat, sister of the sitar player, Vilayat Khan. From this marriage, which eventually failed and ended in separation, he had a daughter, Farida. His second marriage was to Munni Bai, who gave birth to a son, Ekram Ahmed. Around 1965, Khansaheb married Raisa Begum, daughter of the thumri singer, Mushtari Begum of Agra. He had expected that Munni Begum would accept the third wife; however, Munni disappeared and it is rumored that she committed suicide.[3] With Raisa he had a son, Haider Amir, later called Shahbaz Khan.

Khansahib died a premature death in a car accident in Calcutta, and was buried at Calcutta's Gobra cemetery.