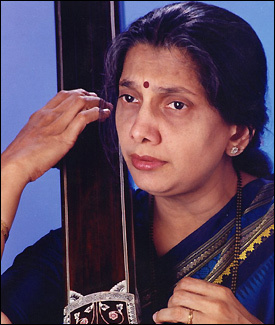 Veena Sahasrabuddhe (b. September 14, 1948) is a leading Indian vocalist and composer of Hindustani classical music. Her singing style has its roots in Gwalior gharana, but it also borrows from Jaipur and Kirana gharanas. Veena is known as a singer of khyal and bhajan.

Veena was born in a musical family. Her father Shankar Shripad Bodas was a disciple of vocalist Pandit Vishnu Digambar Paluskar. She began her early musical education under her father, and then under her brother Kashinath Shankar Bodas. She also learned Kathak dancing in her childhood.

She has a Bachelor's degree in Vocal Performance, Sanskrit Literature, and English Literature from Kanpur University (1968), a Master's degree (Sangeet Alankar) in Vocal Performance from A.B.G.M.V. Mandal (1969), and also Master's degree in Sanskrit from Kanpur University (1979). A.B.G.M.V. Mandal conferred on her a doctorate in vocal music (Sangeet Praveen) in 1988. She was the Head of the Department of Music at SNDT Pune campus.

Veena has given musical performances in India, Australia, Europe, the Middle East, and North America.