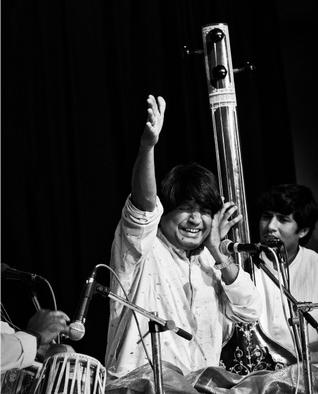 Ganapati Bhat is an Indian Hindustani classical vocalist. He lives and works in Hasanagi, a small village in the state of Karnataka in India.

Ganapati Bhat became interested in Hindustani classical music at a young age. He is a disciple of Basavaraj Rajguru, the maestro from Dharwad whose gayaki (singing style) is based on the Kirana, the Gwalior and the Patiala gharanas.

Bhat started his training in music as a sitarist, but was drawn into Hindustani vocal music. He studied with C. R. Vyas and now trains young musicians in a Gurukula style setting in Hasanagi.

Bhat has performed in all the major Hindustani forums in India and abroad. His third tour to the United States of America, starts in May 2008. In his last two trips to the US, Bhat had concerts at Boston, Chicago, Dallas, Philadelphia, Pittsburgh, New York, San Francisco, Washington etc.