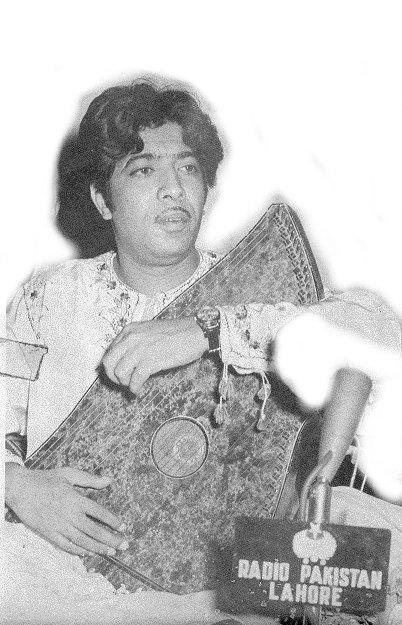 Ustad Bade Fateh Ali Khan (born 1935) is amongst the foremost Khyal vocalists alive today in Pakistan, and a leading exponent of the Patiala Gharana (stylistic lineage). He is the younger of the singing duo Amanat Ali and Fateh Ali, who enjoyed immense prestige and success in Pakistan as well as India, until the demise of Amanat Ali Khan[1] (1932–1974).

Fateh Ali and his late brother were trained by their father, Akhtar Hussain Khan, a distinguished vocalist in the patronage of the princely state of Patiala in colonial, British India. Their grandfather, Ali Baksh Jarnail, also served the same court, and was a cofounder of the Patiala Gharana. The prodigious talent of Amanat Ali and Fateh Ali Khan (Classical Musician) received early encouragement at the Patiala Gharana.

They had a glorious debut in 1945 at Lahore, sponsored by the influential connoisseur, Pandit Jeevanlal Mattoo. Their breakthrough came at the All-Bengal Music Conference in Calcutta in 1949, when Amanat Ali was 17, and Fateh Ali was 14, after which they never looked back.

Amanat Ali – Fateh Ali became celebrities while still in their childhood in undivided India, and achieved their highest official recognition in 1969, when the President of Pakistan conferred on them the Pride of Performance Medal. The "Bade" (elder) prefix got attached to Fateh Ali's name after younger Pakistani musicians with similar names started making waves with an entirely different genre of music.

Life changed dramatically for the budding stars when India was partitioned in 1947, and the family opted to migrate to Pakistan. Overcoming destitution in their new home, the duo swung back, while still in their teens, to earn their rightful place amongst the foremost vocalists of the subcontinent. Fateh Ali was dealt a devastating blow with the demise of his brother Amanat Ali in 1974. Fateh Ali is reported to have suffered a deep depression for over a year and a half, following which he joined Radio Pakistan as a supervisor.

The two brothers as a duo had neatly dividing their singing by specialisation. Amanat Ali Khan had a gifted voice and he embellished his singing in broad sweeps by lagao, and blossoming out in the upper register while Fateh Ali engaged in intricacies of the countless behlawas and complex taans, in a much lower and gravelly voice, respectively drawing inspiration from two elders of their gharana, Ustad Bade Ghulam Ali Khan and Ustad Ashiq Ali Khan.

Fateh Ali was urged to restart his performing career, but would break into tears when first beginning to sing. Fateh Ali Khan eventually overcame this emotional block, and started singing as a duo with his younger brother Hamid Ali Khan, as well his nephews, Asad Amanat Ali Khan (1952–2007) or Amjad Amanat Ali Khan who are both sons of his late brother Amanat Ali Khan. The absence of Amanat Ali made Fateh Ali redevelop and re-align his singing style. He had to fill the void left by Amanat Ali in the middle of his career, which was not an easy thing to do. The void was only partly filled by Hamid, Amjad Amanat and Asad Amanat Ali Khan, as these three have occupied a relatively junior role in comparison with the almost equal footing that Amanat Ali and Fateh Ali fulfilled as a duo.

Though trained also in the mediaeval Dhrupad genre, the uncle-nephew duo restricts its repertoire to the modern mainstream genre, Khayal, and the romanticist genres, Thumris, Dadra, and Ghazal. The pair has, since their alliance, performed widely in Europe, North America, the Middle East, and South Asia, and released several recordings. One highly unusual CD released in 1992 on the ECM label is entitled Ragas and Sagas, which is a collaboration with Norwegian saxophonist Jan Garbarek. Fateh Ali has performed all over the world and has many students internationally. One of his favourite students was Deeyah from Norway. She is originally half Afghan and half Pakistani. She was born in Norway. And now she is in Uk and turned an Emmy award winnder film maker.

In the latter half of the 20th century, the Patiala style of Khayal vocalism has been represented by two streams of the gharana. One stream, gave the music world the Amanat Ali and Fateh Ali duo. The other stream, through its training of Patiala-Kasur gharana vocalists, produced Bade Ghulam Ali Khan (1903–1968), his brother Barkat Ali Khan (1907–1963), and the former's son, Munawar Ali Khan (1933–1989). With the stylistic distinctiveness and continuity of Khayal gharanas having fallen prey to socio-cultural changes on both sides of the India-Pakistan border, Fateh Ali Khan is the last of the thoroughbred Patiala vocalists.

His most talented disciple is Ahmad Wali of Afghanistan, who has shown immense talent at such a young age that Ustad has bestowed upon Ahmad Wali his own name thus calling him Ahmad Wali Fateh Ali Khan. Ahmad Wali Fateh Ali Khan was born in 1987 and was first thought by his father and other masters in the Patiala grana made famous by Ustad Mohammad Hussain Sarahang now wali fateh Ali khan is one of the most talented singer in Afghanistan.The famous nohakhawan haider rizvi alhussaini was also the student of great ustad and still