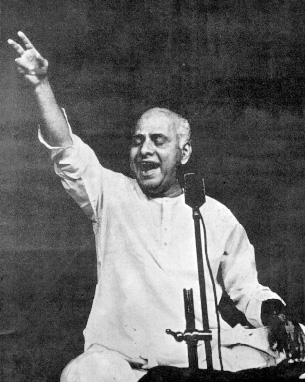 C. R. Vyas was born in Osmanabad, Maharashtra, into a family of Sanskrit scholars and Hari kirtankars. He was influenced by the singing, of his father and grandfather, episodes from Ramayan and Mahabharata.

He had his initial training from Govindrao Bhatambrekar of the Kirana gharana for a decade. Then he learnt from Rajamrambuva Paradkar of Gwalior Gharana. While he was training in the Gwalior style of singing, he was impressed by Jagannathbuwa Purohit who belonged to Agra Gharana and started learning from him. He also got the guidance from Yeshwantbuva Mirashi. He was benefited by other scholar musicians namely Acharya S N Ratanjankar, Chidanand Nagarkar, S. C. R. Bhat and K. G. Ginde.

C. R. Vyas was having an open throated voice and has created his own style with the nice blend of different flavours from all these gharanas. However, the influence of the Gwalior gayaki, is quite prominent. His musical performance clearly shows his efforts, honesty and devotion towards music. Music was penance for him and a pathway to the almighty. Music was his first love, first commitment and his first passion.

He had been employed at ITC in a white collar job. Music was not a primary vocation. In his own words, "In our time we did not think of earning either fame or money through music". He was a leading artist in AIR and on TV. He has participated in major musical events in India as well as abroad.

He was also engaged in research on traditional ragas and compositions. The new ragas composed by him shows the height of his musical talant. Shiv-abhogi, Dhanakoni-Kalyan, Sagera, Shuddha Ranjini, Sanjogiya and several other ragas composed by Vyas are popularly heard in concerts. His personality had another wonderful flavour of compsing bandish. He composed more than 200 bandishes in different ragas under the pen-name Gunijan. As a tribute to his Guru Gunidas he started the Gunidass Sangeet Sammelan in 1977. He has written a book Raag Sarita which sums up his great work in the field of music.