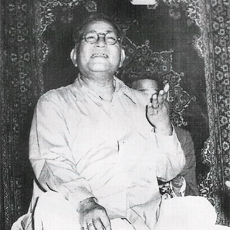 Barkat Ali Khan was born in Kasur, then in the Punjab province in British India. He had his initial training from his father Ali Baksh Khan and later by Bade Ghulam Ali Khan. After partition, Barkat Ali Khan migrated to Pakistan and concentrated on the lighter aspects of Hindustani classical. He was acknowledged as one of the great exponents of Thumri, Dadra, Geet and Ghazal, and was well known for both Purab and Punjab ang Thumris. Many still consider him a superior thumri singer than his elder brother, though he didn't receive acknowledgement to the extent Bade Ghulam Ali Khan did. He taught noted ghazal singer Ghulam Ali.

He died a premature death at the age of 57.